Sputtering Equipment (Expandable)Sputtering equipment is a PVD-type thin film forming equipment that utilizes the sputtering phenomenon in which ionized Ar gas under plasma discharge collides with a target at high speed, and target atoms ejected by the collision are deposited on the substrate. 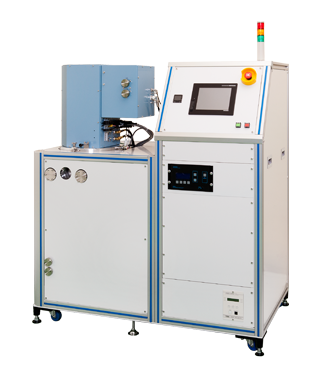 This model can be easily combined with ALD and Annealing equipment at a later stage.

By connecting with Plus series equipment, it is possible to perform advanced thin film manufacturing processes, such as lamination in combination with ALD equipment, heat treatment with annealing equipment, gas replacement treatment, etc.

Equipped with three φ2 inch magnetron cathodes (with shutters), achieving a film thickness distribution of ± 3% or less within φ100mm. It’s considered as the top class quality in Japan(according to our survey).
This equipment can also be used for single-layer, multi-layer, and alloy film formation.

With regard to the substrate heating function that affects the film quality, MAX800 ° C (monitor temperature) can be achieved by radiant heater as the option whereas the standard specification is up to MAX300 ° C.
The surface temperature of the actual substrate shall be confirmed at the pre-shipment inspection.

Stable film formation can be obtained even for insulating material targets which can cause abnormal discharge due to the high-frequency RF power supply with a pulse oscillation function. 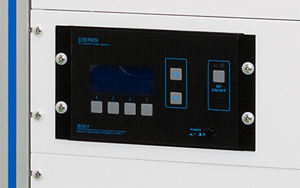 A load lock chamber can be provided by connecting with STR2000 using an expansion port placed at the side of the main unit.
Also, this model can be combined with other Plus series such as Sputtering, ALD, Annealing and vapor deposition equipment to deposit substrates without exposure to the atmosphere.

The touch screen is placed at the elevation angle, and it is designed in consideration of better visibility and operability.
The program employs a GUI (Graphical User Interface) that allows the operator to understand intuitively and it has good visibility with respect to various statuses, including operating conditions and good operability to make easy adjustment for valves and setting items.
In addition, this touch screen program guarantees safety and operability with various interlocks and alarm functions.
Responding to the daily changing research or the equipment modifications,
the program was designed so that the modification can be easily done.
For this design it can result in the reduction of the program design cost. 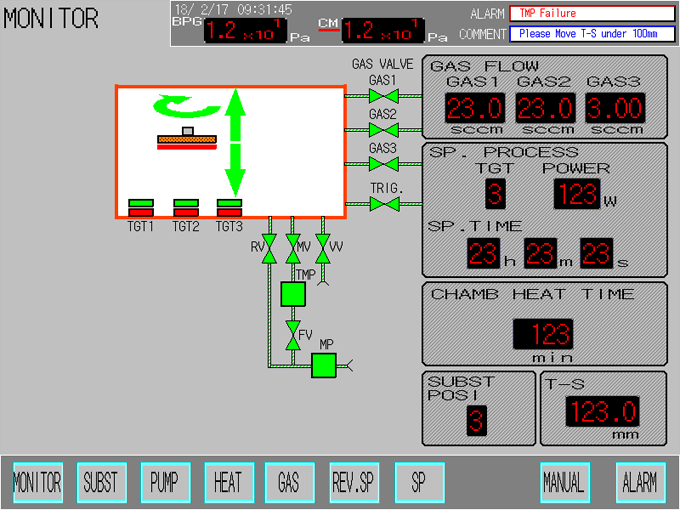 A main unit and control box was designed as an integration type. Due to this simple design, this model can be easily moved and requires less work at the time of the layout change at a later stage.

Various options are available for SSP3000Plus.Modification to add those options shall be arranged upon request before/after the installation. Some of those modifications may not be conducted after installation. Please contact us for details.

The connection with ALD and Annealing equipment can be easily done via STR2000 at a later stage.

With regard to the substrate heating function that affects the film quality, MAX800 ° C (monitor temperature) can be achieved by radiant heater as the option where as the standard specification MAX300 ° C.

The surface temperature on the actual substrate shall be confirmed at the pre-shipment inspection.

By changing the manual matching box of the RF power supply to an auto-matching box, discharge under optimal conditions can be maintained.
In addition, it’s capable for fully automated film formation with recipes.

By adding a reverse sputtering mechanism, it is possible to clean the surface by removing the oxide film adhered to the substrate surface as a pretreatment for film formation. 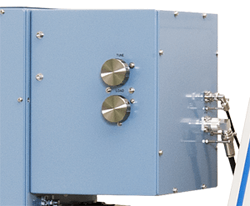 It is possible to increase the substrate rotation speed from the standard 5rpm to 50rpm.
Improved uniformity of the film thickness and good effect on alloy film formation by multi-source simultaneous sputtering is expected.

Max. 2 process gas introduction systems can be equipped with.
The reactive sputtering to introduce oxygen or nitrogen requires this addition. 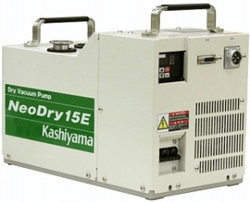